It’s been a long and amazing journey and it’s not even finished…
So stoked I got to climb so many mountains last year, ski half of them, fly off some of them or just hike down.
So grateful I got to share all those summits with such amazing humans! Nothing would have been possible without them…
And so respectful to the mountains for all they gave and taught me.

Now there are two more summits to go, let’s keep it safe and keep it fun!

Watch the Movie on Salomon TV

Today is the the 21st of March, which means the first day of spring. And today we are skiing down back to Zermatt after climbing the second two highest peaks of the Alps, Dufourspitze and Nordend.

In total, and together with Colin Haley we have climbed 21 peaks out of the 82 above 4000m. Whoop whoop !

Below is what we did so far:

2nd and 3rd of March: we started with the Gran Paradiso (4061m #1) with Colin Haley and Anthony Bonello (film maker). On day 1 we got up to Vittorio Emanuele hut. On day 2 we did the summit and back down.

4th to 10th of March: we had 7 days of bad weather. I stayed at home in Cham, trained a bit, ski some powder, did some filming and spoke a lot with Laurent Valbert, our weather man ;) 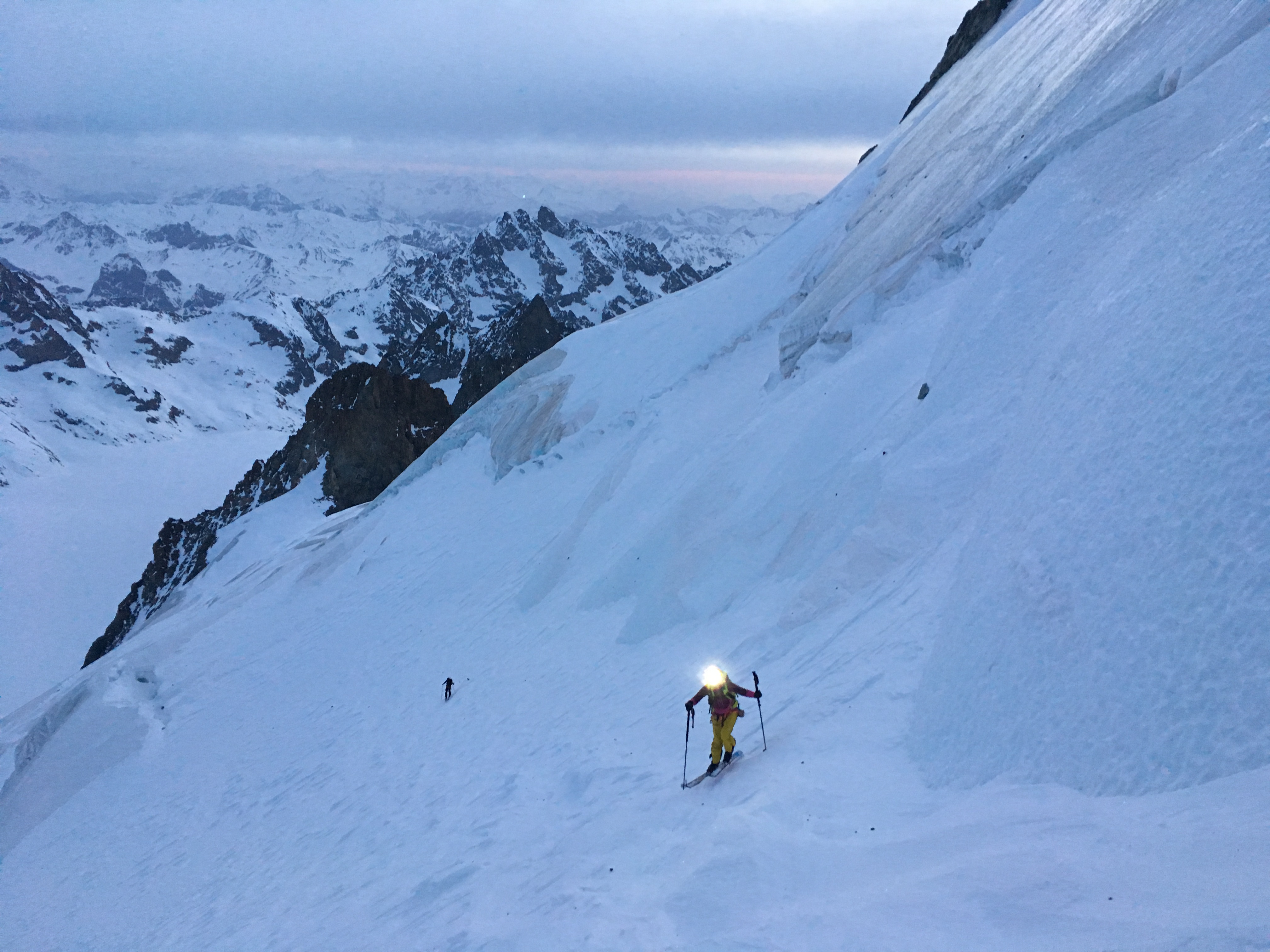 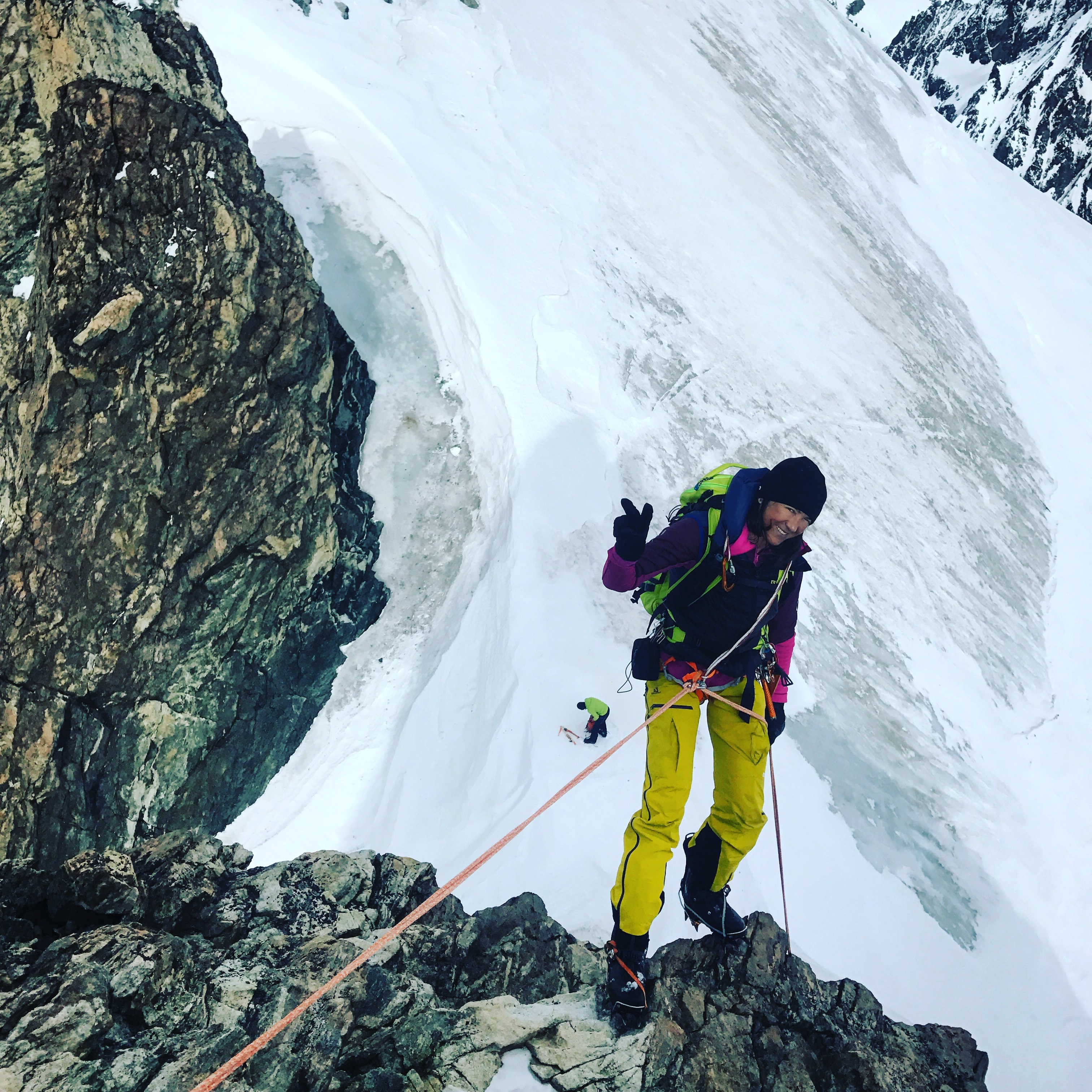 13th of March: At home in Cham, resting and preparing the next days.

14th of March: Colin and I skin up on the piste to Testa Grigia and stayed at the Cervino guide hut with Guido Perrini (film maker) from Breuil Cervinia. 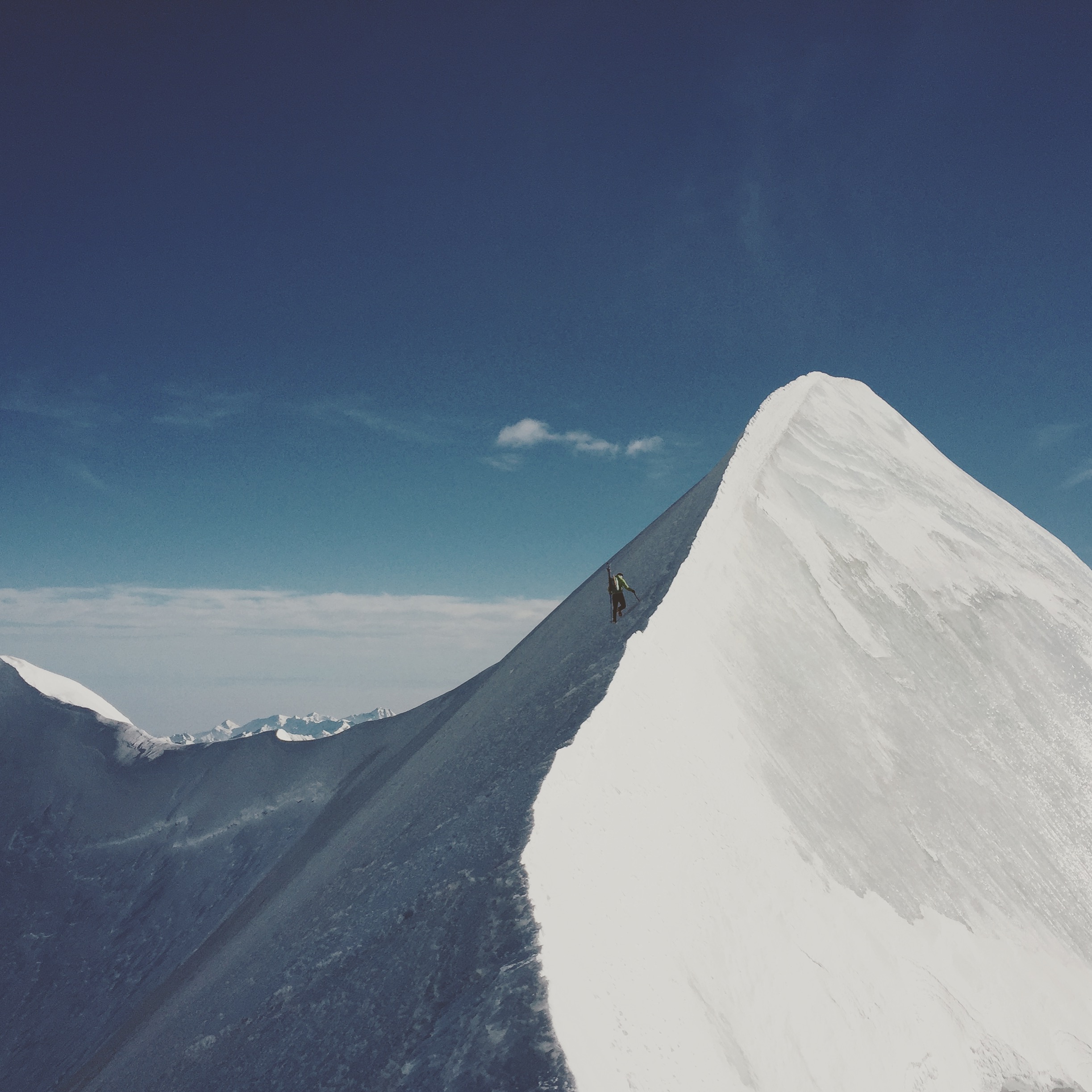 Colin Haley climbing up the last meters of Castor 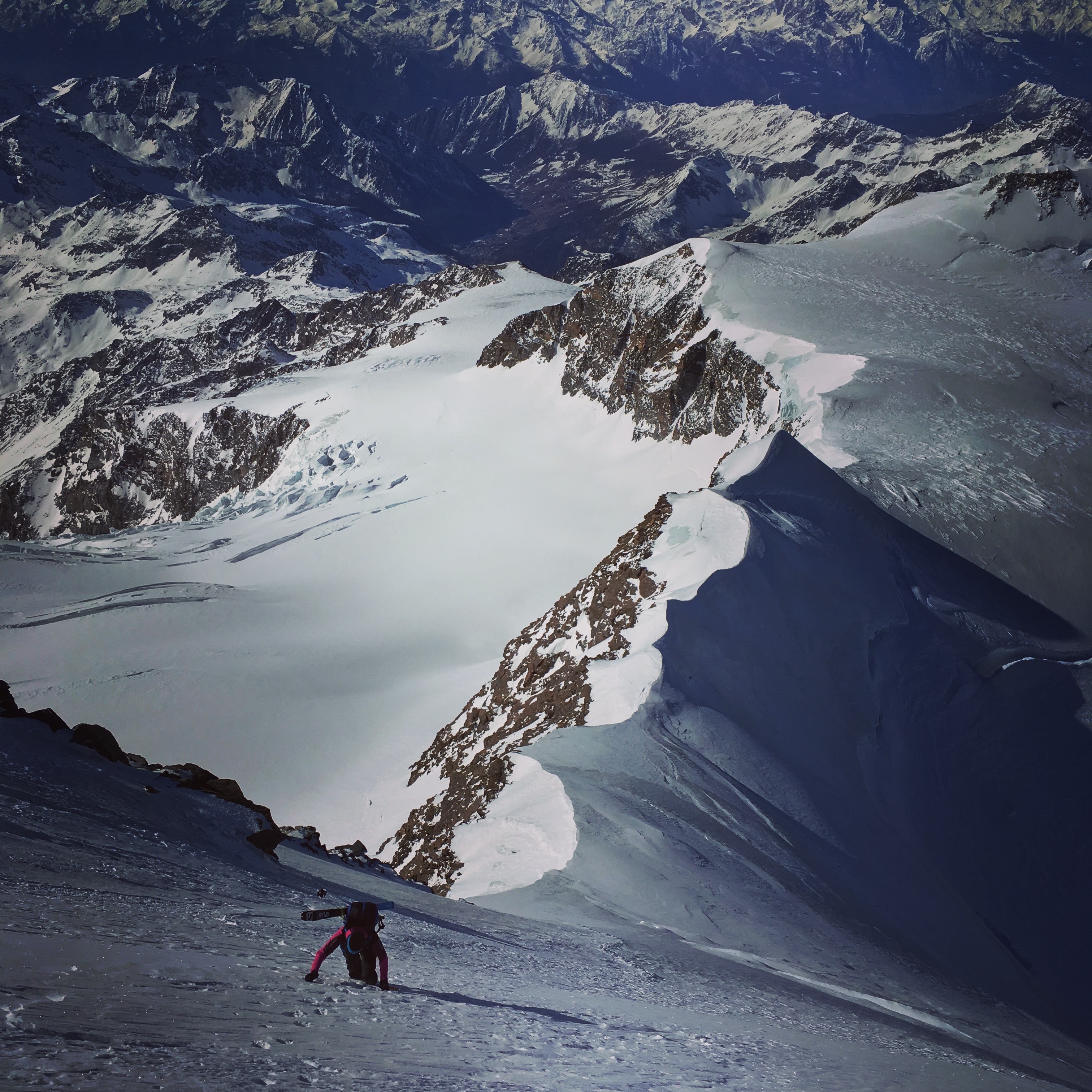 17th of March: We skinned up to Punto Giordani (4046m #19) and down to Gressoney then back to Breuil Cervinia and drove back to Cham.

19th of March: Colin, my brother and I headed to Zermatt and skinned up the pist to Rotenboden. Then down to the Gorner Gletscher and up to the Monte Rosa hut.

Conditions were not easy. We had to go thru a big crevasse on the way up (and then on the way down). The fixed ropes of the normal route to Dufour had been removed. We decided to go up a by a shorter couloir further left. But the last 20 meters were steep and not so easy. Colin soloed it and could give me a belay from the ridge which felt much safer. The ridge to reach the Dufour summit was snowy and it took us a bit of time to reach it. We decided to go down to the normal couloir, hoping to find some old belays still in place but there was not much. 4 rappels later with two on abalakovs we reached back the Silbersattel. We thought the hardest was done but as soon as we started to climb the Nordend ridge we realized it was all icy. It took a lot of our mental energy to go up to Nordend and down again. I was mentally tired after it and hungry too. The day turned out to be much longer than planned and we not much water nor food left. We decided to sleep again at the Monte Rosa hut and ski down to Zermat the next day. 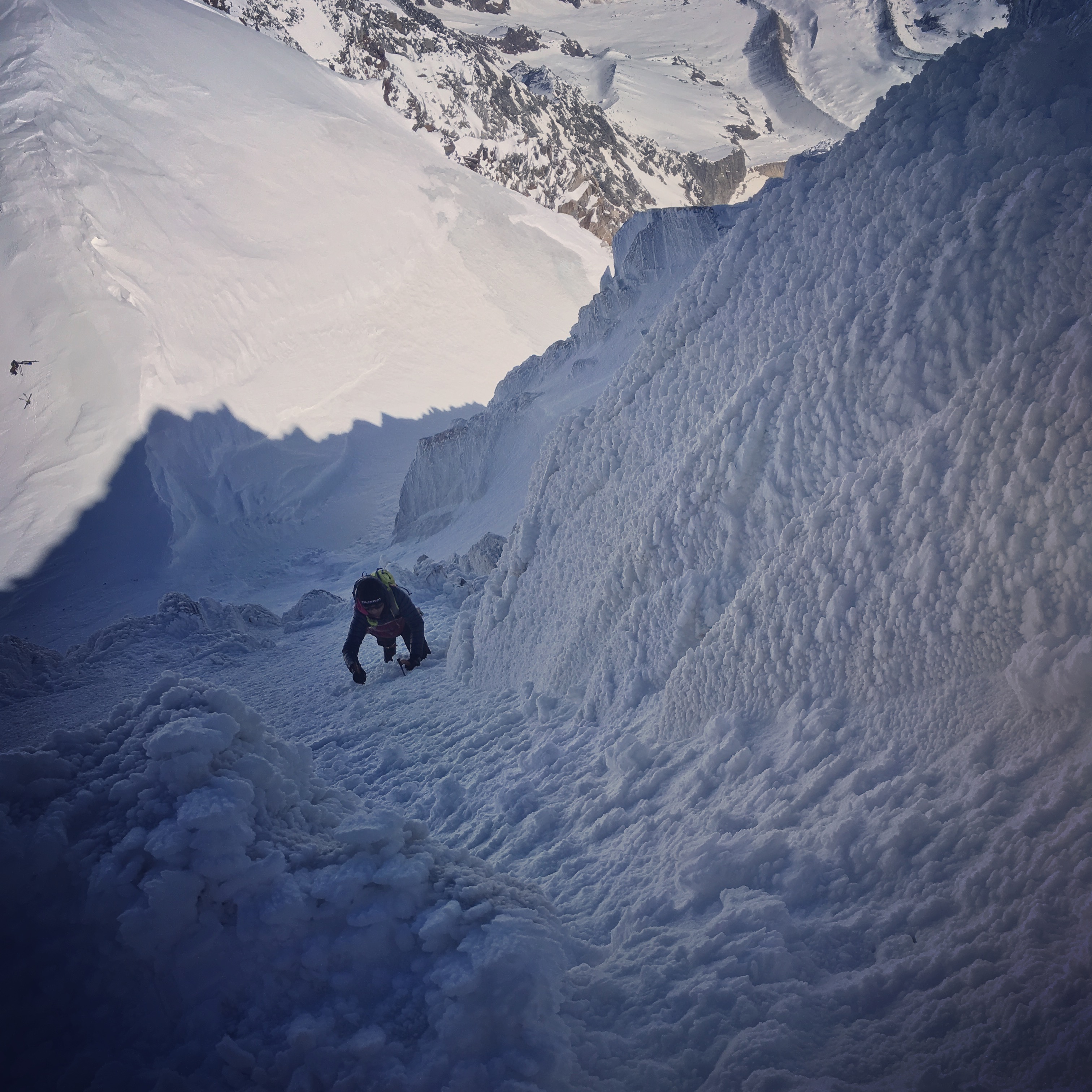 Climbing up the snowing couloir before a short but hard section of mixte to gain the Dufourspitze ridge – Photo: Colin Haley 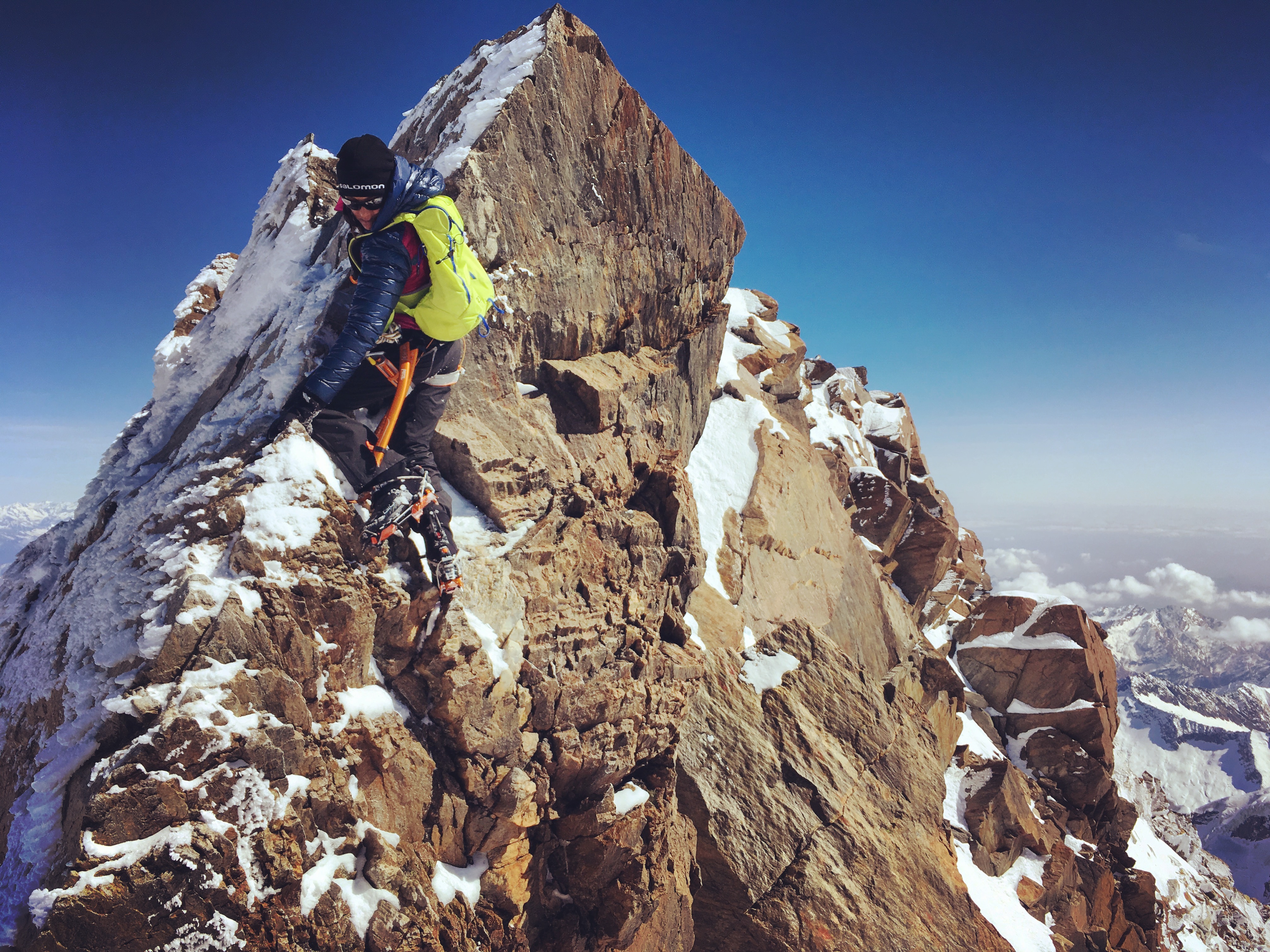 21st of March: Getting down to Zermatt from the Monte Rosa hut. And back to Cham.

Also you can check our itineraries on movescount here 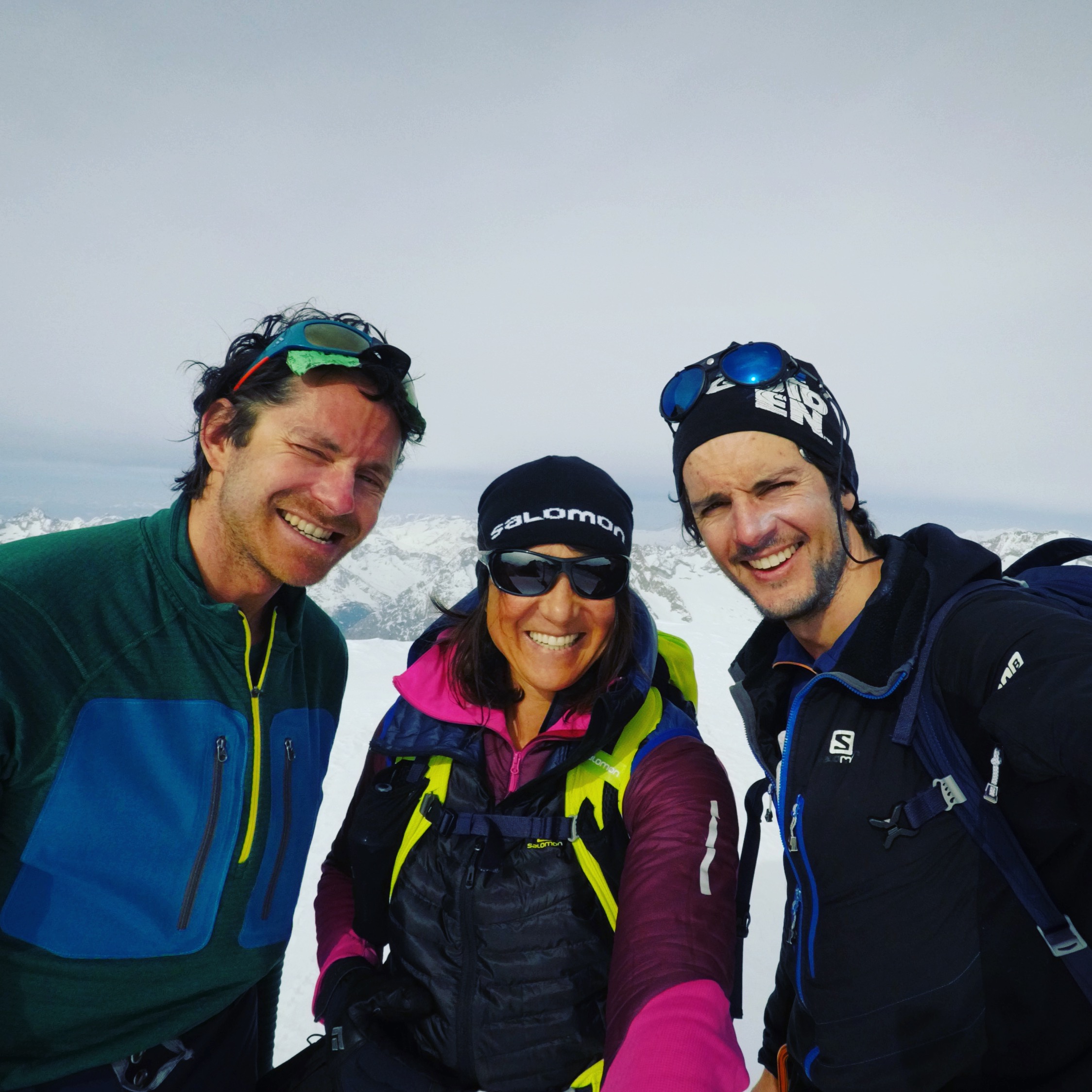 A sweet little film about our adventure skiing the Matterhorn East face in May 2016 with Lorraine Huber, Giulia Monego, Melissa Presslaber and myself. This short edit shows perfectly the fabulous team spirit of us ripping ladies and the amazing time we had together on this iconic and beautiful mountain.
Enjoy watching!

Four Girls and a Matterhorn from Liv Sansoz on Vimeo.